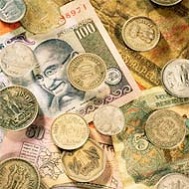 Rating agency Crisil today said it expects the rupee to strengthen to Rs 45-46 level against dollar in the next five months on the back of pick-up in FII inflows towards early 2012.

The rupee is expected to strengthen to Rs 45-46 per dollar by March 2012, from the current lows of around 50, Crisil said in a report.The rupee in the past one month has dived from 45 level to near 50 levels against the US currency on continued FII outflows and strong dollar overseas.

Rupee closed at 49.45/46 against dollar today. The key assumption behind the expected recovery of the rupee is that developed economies will witness slowdown, but they will avoid another recession. In our opinion, this will lead to a pickup in FII inflows towards early 2012 as the risk appetite for investment in emerging markets returns, it said.

However, in a worst-case scenario, it said, a potential double dip in growth in advanced economies could have a sharper-than-expected impact on the Indian currency, causing it to slide further and prolonging its recovery.

The rupee fell to almost 50 against the dollar on September 23 from 44.4 in July 2011. The fall is almost as steep as that during the peak of Lehman crisis in 2008, it said. The rupee depreciation during the Lehman episode was characterised by a global recession and the consequent credit freeze. The current slide of the rupee is due to two factors - first, rising demand for dollars by Indian companies, in conjunction with reducing supply of dollars due to weak FII inflows, it said.

Repayment pressures on corporate India, rather than capital outflows, seem responsible for the sharp weakening of the rupee, it said.

While rising risk aversion has led to portfolio outflows from India in the past few weeks, the quantum of outflows has not been too large, it said, adding, in fact, the withdrawal of portfolio investments from India during August-September 2011 has been much lower as compared to October 2008 and January-March.