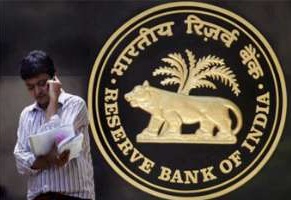 Amidst high food inflation, falling industry output and uncertain crude oil prices, the Reserve Bank of India hiked key policy rates for the eighth time since last March by 25 basis points in its mid-quarterly review on Thursday
The repo and reverse repo rates were hiked by 25 bps to 6.75 per cent and 5.75 per cent, respectively. CRR was left unchanged at 6%.
One basis point is one-hundredth of a percentage point. Repo rate is the rate at which the RBI lends to banks against securities. The reverse repo is the rate it pays to banks for deposits.
RBI said it was likely to maintain its anti-inflationary bias, reinforcing market expectations that further rate increases are in the pipeline, and raised its forecast for headline inflation at the end of March to 8 percent, from its earlier 7 percent.
"The underlying inflationary pressures have accentuated, even as risks to growth are emerging. Rising global commodity prices, particularly oil, are a major contributor to both developments," the central bank said.
In the last monetary policy review, Subbarao raised policy rates by 25 basis points meeting market expectations and raised inflation forecast for the fiscal by 150 basis points to 7%, drawing criticism that prognosis and policy are not in sync.
"The policy tone is hawkish, prioritising inflation over growth," said Siddhartha Sanyal, chief India economist at Barclays Capital in Mumbai.
"We have penciled in plus-25 basis points hike every quarter, with risks that they could do more," said Radhika Rao, economist at Forecast Pte in Singapore.
RBI had raised policy rates seven times since March, 2010, with a hike of 175 basis points in short-term lending (repo) rate and 225 basis points in short-term borrowing (reverse) repo rate in its bid to arrest inflation.
Data earlier in the week showed annual inflation accelerated unexpectedly to 8.31 percent in February, from 8.23 percent the previous month, defying forecasts of a slowdown.
While food inflation has fallen from peaks of 20 percent in early 2010, it remains stubbornly high at 9.42 percent.
Industrial growth slowed to 3.7 per cent in January this year, compared to 16.8 per cent expansion in the year-ago period, dragged down by the poor performance of the manufacturing sector, particularly capital goods.
Recent figures from recruitment consultancy Aon Hewitt showed that Indian corporate salaries were set to grow by nearly 13 percent this year -- the fastest pace in the world.
Investments remain a concern with rising interest rates deterring companies. The GDP numbers for the third quarter showed a decline in investments to 29.8% of the GDP from 34.1% in the second quarter.
Raising concerns that domestic demand growth is likely to slow, brokerages such as Citi and Morgan Stanley recently scaled down their GDP growth forecast for India to 8.4% and 7.7%, respectively, for the next fiscal year. In comparison, the government in its Budget last month said the economy is expected to grow at 9%, plus or minus 0.25%, in 2011-12.
RBI has been the region's most active in raising rates as the country climbs out of the financial downturn with growth projected at nine percent for the next fiscal year starting April 1.
Across Asia, countries such as China, South Korea, Thailand and Vietnam have been tightening monetary policy to counter rising prices.
Source: economictimes.indiatimes.com