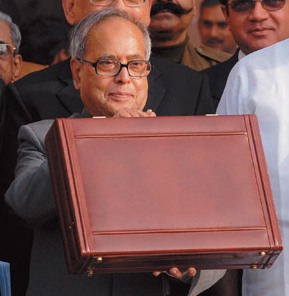 Following are the highlights of the budget:

TAXES ( Read full story on taxes )
* Standard rate of excise duty held at 10 percent; no change in CENVAT rates
* Personal income tax exemption limit raised to Rs 180,000 from Rs 160,000 for individual tax payers
*For senior citizens, the qualifying age reduced to 60 years and exemption limit raised to Rs 2.50 lakh.
*Citizens over 80 years to have exemption limit of Rs 5 lakh.
* To reduce surcharge on domestic companies to 5 percent from 7.5 percent.
* A new revised income tax return form 'Sugam' to be introduced for small tax papers.
* To raise minimum alternate tax to 18.5 percent from 18 percent ( Read story )
* Direct tax proposals to cause 115 billion rupees in revenue loss
* Service tax rate kept at 10 percent
* Customs and excise proposals to result in net revenue gain of 73 billion rupees
* Iron ore export duty raised to 20 percent
*Nominal one per cent central excise duty on 130 items entering the tax net. Basic food and fuel and precious stones, gold and silver jewellery will be exempted.
*Peak rate of customs duty maintained at 10 per cent in view of the global economic situation.
*Basic customs duty on agricultural machinery reduced to 4.5 per cent from 5 per cent.
*Service tax widened to cover hotel accommodation above Rs 1,000 per day, A/C restaurants serving liquor, some category of hospitals, diagnostic tests.
*Service tax on air travel increased by Rs 50 for domestic travel and Rs 250 for international travel in economy class. On higher classes, it will be ten per cent flat.
* Electronic filing of TDS returns at source stabilised; simplified forms to be introduced for small taxpayers.
* Works of art exempt from customs when imported for exhibition in state-run institutions; this now extended to private institutions.

GROWTH, INFLATION EXPECTATIONS ( Read: Inflation remains principal concern )
* Economy expected to grow at 9 percent in 2012, plus or minus 0.25 percent
* Inflation seen lower in the financial year 2011-12

AGRICULTURE ( Read: Farm loans at 4 per cent )
* Removal of supply bottlenecks in the food sector will be in focus in 2011-12
* Agriculture growth key to development: Green Revolution waiting to happen in eastern region.
* To raise target of credit flow to agriculture sector to 4.75 trillion rupees
* Gives 3 percent interest subsidy to farmers in 2011-12
* Cold storage chains to be given infrastructure status
* Capitalisation of National Bank for Agriculture and Rural Development (NABARD) of 30 billion rupees in a phased manner
* To provide 3 billion rupees for 60,000 hectares under palm oil plantation
* Actively considering new fertiliser policy for urea
* Food storage capacity to be augmented - 15 more mega food parks to be set up in 2011-12; of 30 sanctioned in previous fiscal, 15 set up.
* Comprehensive policy on further developing PPP (public-private-partnership) model.
* Farmers need access to affordable credit.
* Moving to improve nutritional security.
* Necessary to accelerate production of fodder.

ON THE STATE OF THE ECONOMY ( Read: Pranab on economy )
* "Fiscal consolidation has been impressive. This year has also seen significant progress in those critical institutional reforms that will pave the way for double digit growth in the near future."
* "At times the biggest reforms are not the ones that make headlines, but the ones concerned with details of governance which affect the everyday life of aam aadmi (common man). In preparing this year's budget, I have been deeply conscious of this fact."
* Food inflation remains a concern
* Current account deficit situation poses some concern
* Must ensure that private investment is sustained
* "The economy has shown remarkable resilience."
* Setting tone for newer, vibrant economy.
* Economy back to pre-crisis trajectory.
* Development needs to be more inclusive.

ON GOVERNANCE
* "Certain events in the past few months may have created an impression of drift in governance and a gap in public accountability ... such an impression is misplaced."
* Corruption is a problem, must fight it collectively