Unknown January 16, 2011
Anil Ambani group today said Reliance Infra and RNRL settled the Sebi probe through voluntary terms proposed by them and the regulator did not impose any ban on the companies or their directors. 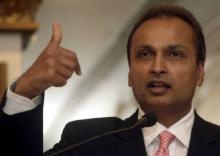 "There is no bar or ban imposed by Sebi on the company and its directors. The matter has been settled through voluntary consent proceedings, as stated in Sebi order," a Reliance Infrastructure spokesperson said in a statement.
The statement came a day after Sebi passed a consent order to settle a probe into alleged violation of regulations for foreign investment and unfair trade practices by Reliance Infra and RNRL.
The terms include payment of Rs 50 crore as settlement charges, which have been paid by the directors without any financial burden on the companies involved.
Also the two companies, their Chairman Anil Ambani and four other directors offered to abstain from any investment in listed stocks subject to certain conditions, according to the Sebi order.
According to the consent procedure, the entities being probed by Sebi propose certain terms and conditions to settle the case, like an out-of-court settlement. However, it is up to Sebi to accept these terms for settling the case.
While R-Infra and RNRL cannot invest in secondary market till 2012, Chairman Anil Ambani and other directors would not do so till December 2011.
However, the debarment of companies and officials does not apply to investments in mutual funds, primary market issues, buybacks and open offers.
The other officials named in the order include Reliance Infra Vice Chairman Satish Seth and three directors -- S C Gupta, Lalit Jalan and J P Chalsani.
The case relates to a probe by Sebi in dealings in the shares of another Anil Ambani group firm Reliance Communications and alleged violation of foreign investment and unfair trade practices norms by R-Infra and RNRL.
"In accordance with Sebi consent mechanism, the settlement is without admission or denial of guilt. Settlement (was) made in interests of investors to pre-empt unnecessary and time-consuming litigation," R-Infra said after the order.
Sebi said that the consent order was without prejudice to its right to initiate enforcement actions, including reopening of the proceedings pending against the entities if any of its terms are breached or any of the representations made before it are found to be untrue.
Source: sify.com