Equity bechmarks fell nearly 1% on Tuesday, after the Reserve Bank of India warned of further rise in inflation, prompting worries of more interest rate hikes in the short term. 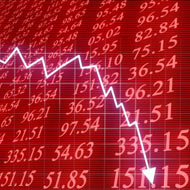 The 30-share Sensex and the 50-share Nifty closed below their psychological levels of 19,000 and 5700 respectively, as investors dumped bank shares. A 5% fall in index  heavyweight Hindustan Unilever on the back of lower than expected quarterly numbers, added to the downtrend.
Fund managers, however, are of the view that today's abrupt decline in share prices was more of an aberration, and the market could move in a narrow range near term. "The monetary policy was on expected terms, but the reaction (of the market) also had to do with other factors like earnings disappointment and the F&O expiry on Thursday," Sunil Singhania, head-equities, Reliance Mutual Fund told moneycontrol.com.
The Reserve Bank of India today raised repo rate--the rate at which it lends to banks--and reverse repo rate--the rate at which it borrows from banks--by 25 basis points each, as it tried to check the surge in inflation. A section of the market was expecting the RBI to raise key rates by 50 basis points, as the rapidly rising inflation is now threatening to undermine economic growth.
The Sensex closed at 18969.45, down 181.83 points over the previous close, after touching a high of 19340.99 earlier in the day.
Investors heaved a sigh of relief as the hike in key rates was lower than feared, but the central bank's gloomy forecast on inflation, growth and current account deficit, dampened sentiment. "Near term, we do not expect the market to fall significantly. Most of the near term headwinds have been factored into the prices," Mr Singhania said, adding that there have been phases in the recent past when it appeared that interest rates would get out control.
At the same time, money managers are not hopeful of a big upside.
"We could see the market move in a range between 18,500-21,000," A Balasubramanian, chief executive, Birla Mutual Fund told moneycontrol.com.
"There is also some uncertainty about earnings growth, so investors would be cautious about buying at higher levels," he said.
Bank shares were the biggest losers, as rising interest rates are expected to increase the cost of funds, and also moderate demand for credit.
Among sectoral indices, the BSE Bankex was the biggest loser, falling 2.3%.
"On the whole, earnings of banks have been better than expected. But going forward, there could be a pressure on NIMs (net interest margins)," said Abhijit Gulanikar, chief investment officer, SBI Life Insurance.
"The long term story of credit growth still holds, but in the short term, bank stocks could be under pressure as too many investors own them," Mr Gulanikar added.
He does not expecte a steep fall in benchmark indices from current levels, but is bearish on shares of capital goods and construction companies, which he says are likely to face problems in project execution. He is also bearish on companies that are sensitive to interest rates.
Source: moneycontrol.com