Its issue price has been fixed at Rs 36, at higher end of the price band. The company has garnered Rs 6,038.55 crore from the issue; out of which, the government received Rs 2,012.85 crore and that will be used for infrastructure projects. The rest of the amount i.e. Rs 4,025.7 crore, the company will use for its power projects.

(Under Subscription under Employee quota have been allocated to QIB/HNI/Retail in 60:10:30 ratio) 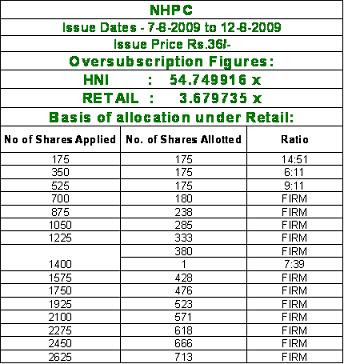 It had launched its initial public offering (IPO) of 1,67,73,74,015 equity shares of Rs 10 each with a price band of Rs 30-36 per equity share. It had opened on August 7 and closed on August 12, 2009. The issue received overwhelming response from all categories of investors and was subscribed 23.74 times.

The proceeds of the fresh issue (after deducting the proportionate underwriting and issue management fees, selling commissions and other expenses associated with the fresh issue) will be used to part finance the construction and development costs of certain of projects, namely, Subansiri Lower, Uri – II, Chamera - III, Parbati – III, Nimoo Bazgo, Chutak, and Teesta Low Dam - IV.