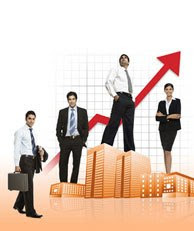 While the developed markets globally bear a pessimistic outlook, the stock market in India appear to be in high spirits. As per a report, the sensitive index (Sensex) will touch an all-time high level of 21,000 within the next 15 years.

The report based on a study by U.S. based Elliot Wave International, has termed India, Taiwan and New Zealand as potential 'baby bulls', while stock markets in Japan, Singapore, Hong Kong, China and Australia will be under the 'bear' grip. The report has analyzed that recent sharp reversal rally in Indian market, post the October 2008 lows, points at regaining earlier high levels.

"The decline since the 2008 high can be counted as three waves. A three-wave decline opens possibility of a rally back to near the 2008 highs. But there is reason to set our sights even higher," the research firm said. Each high and low in the stock market is calculated on the basis of waves. The highs achieved by the Indian bourses between 2003 to January 2008 forms the first wave, while the bear market, till it saw the October lows, formed the second wave. Since 2003, when the Sensex was quoting around 5,800 levels and had seen lows to the extent of 2,904.44 points, it had been on an upswing and reached the 21,000 level from where it started coming down to below 8,000 levels.