Unknown March 20, 2009
Ashok Dasgupta
The drop in price rise is good for the economy, says Montek 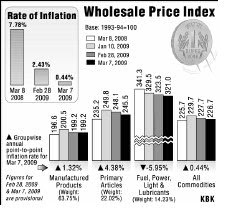 NEW DELHI: For the first time in 30 years, the rate of inflation plummeted to its lowest level at 0.44 per cent for the week ended March 7 from 2.43 per cent in the previous week, giving rise to fears that the economy is headed towards a more severe slowdown with the onset of a deflationary phase in the next few months.

Even as the Wholesale Price Index-based inflation plunged by 199 basis points and is almost certain to move into negative territory by the end of this fiscal, the prices of food articles continued to rule at high levels while those of manufactured goods witnessed a sharp decline.

In its analysis of the WPI data, the Finance Ministry said: “The drop of 199 basis points in inflation is the steepest since the week ended November 1, 2008. In the last 30 years, there is no record of inflation falling this low since 1977-78.” With the slump in WPI inflation mainly accounted for by the plunge in prices of manufactured items, India Inc. expressed serious concern and sought immediate and adequate monetary steps from the Government and the Reserve Bank of India (RBI) to induce consumer demand and thereby ensure growth.

On the contrary, while bankers felt there was no further scope for rate cuts by the RBI, the Government sought to allay apprehensions over the likelihood of the economy entering a phase of deflation.

Attributing the fall in inflation to slackening demand, CII Director-General Chandrajit Banerjee said: “We see that there is a lack of demand with high levels of inventory that has led to downward pressure on commodity prices... We need more credit flow [for] industry.”

The Government, on its part, sought to argue that the economy could be entering a deflationary phase.

Speaking at a FICCI function here, Cabinet Secretary K. M. Chandrasekhar said: “I do not see any signs of deflation right now. Probably, the decline in inflation is more due to the higher base last year than any significant drop in prices.”

Speaking on the WPI slump, Planning Commission Deputy Chairman Montek Singh Ahluwalia said: “For one week if it [inflation] goes a little bit below, you can’t call that deflation. But it is true that it has gone down sharply and I think it should remain at a low level.” The drop in price rise, he said, was “good” for the economy.