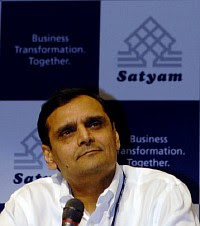 NEW DELHI: The government on Thursday ordered probe into the books of accounts of eight subsidiaries of the Satyam Computer Services, whose head B Ramalinga Raju admitted that the company was declaring forged accounts.
The inspection would be conducted as per the provisions of section 209A of the Companies Act, Corporate Affairs Minister Prem Chand Gupta told reporters today.

The problem in Satyam erupted after the IT major tried to buyout Ramalinga Raju family-promoted Maytas Properties and Maytas Infrastructure, companies belonging to kin of promoters of Satyam. The USD 1.6-billion deal, however, was aborted following protest from the shareholders.

Talking to newsperson, Gupta said that Financial Reporting Review Board of the ICAI has been asked to get the internal working documents of Satyam and give its report within three days to the institute.

Institute of Chartered Accountants of India, he added, has been directed to take appropriate action against the erring auditors.

The Ministry, Gupta said, was exploring different options with regard to actions that can be taken against the erring company and auditors.

"Government is keeping all options open. We are in close interaction with all other regulators to take coordinated action," he said.

"Registrar of Companies and Securities and Exchange Board of India (SEBI) are working in Hyderabad. There feedback has been sought," the Minister said.

The Ministry, he said, has also sought the help of the Andhra Pradesh government and MCA Secretary Anurag Goel was in touch with the Andhra chief secretary.