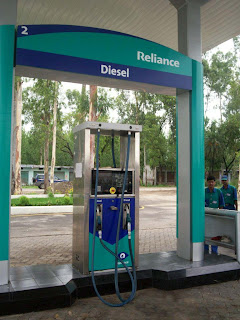 New Delhi (PTI): Reliance Industries, India's largest private sector oil company that shut down all of its petrol pumps earlier this year because of huge losses, wants to restart selling petrol and diesel after margins on the two fuels turned positive.
"Reliance has informed us that they are keen on reopening their outlets," Petroleum Secretary R S Pandey told reporters here.

The Mukesh Ambani-run company had shut all of its 1,432 petrol pumps around March after it could not compete with public sector companies, who sold fuel at rates much lower than their cost, as they got government subsidies.

However, with the fall in international oil prices, margins on both petrol and diesel have turned positive. State-run oil companies Indian Oil, Bharat Petroleum and Hindustan Petroleum are making a neat profit of Rs 9.86 a litre on petrol and Rs 0.70 per litre on diesel.

Pandey said Essar had written to him informing that 500 pumps have resumed operations. It plans to open most of its 1,250 fuel stations by the end of December.

The company began reactivating most of its outlets in southern and western India from August and would double its retail network by the end of December, taking it to 1,250 by January 2009.

Rapidly plunging crude oil prices has made it viable for the three private retailers - Reliance Industries, Essar Oil and Shell - to get back in the retail market. The private firms can now even offer fuel at lower prices, compared to their state-owned rivals.

In 2002, the Government had awarded fuel retailing rights to companies that had invested Rs 2,000 crore in petroleum infrastructure in India.

Besides Reliance, Essar and Shell, Cairn India and Numaligarh Refinery were eligible to set up petrol and diesel retail outlets.

Reliance had applied for permission to set up 5,849 petrol pumps, while Essar sought approval for 1,700 outlets. Shell had obtained permission for 2,000 pumps.

When crude oil prices climbed and the difference between domestic retail price and cost of product widened to some Rs 23-24 a litre, Reliance shut all its outlets, while Essar restricted sales to just a 100 of its outlets. Shell, which had about 50 stations, had reviewed its expansion plans in India and decided not to open any more petroleum outlets.

With the price of crude having fallen to USD 50 and with the government not reducing retail prices of petrol and diesel, the private retailers want to reopen their petrol stations.