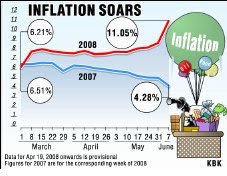 Inflation jumped by more than two percentage points to hit 11.05 percent for the week ended on June 7 from 8.75 percent a week earlier, the official figures showed, stoking expectations of further monetary tightening to tame prices.

The increase was driven by a sharp increase in state-set fuel and cooking gas prices announced earlier this month as well as another rise in food costs.

The new rate incorporated for the first time the increase in fuel prices aimed at stemming huge oil company losses caused by surging global crude prices in the past month.

The rise shocked analysts who had forecast that inflation would be around 9.8 percent and was a heavy blow to the government, which desperately wants to tame prices, fearing a voter backlash in national elections due by next May.

The Congress party, which heads the national coalition, has suffered a string of state poll defeats with inflation, which has hit India’s teeming poor the hardest, blamed as a key culprit.

The inflation figures hit shares, which slumped after the data was announced and were trading down 2.09 percent or 315.34 points at 14,772,62 points as investors feared more interest rate rises that could hit company profits and slow the economy.

India’s economy grew 9 percent in the past fiscal year, second only to China among big economies, but some economists expect expansion to slow to seven percent or lower this year as a result of monetary tightening.

The data came a week after the central bank increased its leading lending rate — known as the repo rate — by a of a quarter percentage point to 8 percent, a six-year high and the latest in a series of aggressive anti-inflation measures.

Public anger has been mounting over rising prices and in particular over the fuel price hike.

India’s truckers have threatened a nationwide strike from July 2, a protest that would pull 4 million vehicles off the road, disrupting commercial shipments.

Analysts have said the government had little left in its fiscal arsenal to fight inflation — it has already banned exports of staple foods like rice to boost supplies and check inflation.

They also said that India was a victim of global forces.

The OECD has forecast inflation globally this year will be the fastest in seven years due to surging international commodity prices and a doubling in oil prices in the past year.