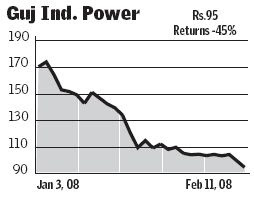 Kumar Shankar Roy
BL Research Bureau Patterns in stock price declines on Monday showed that investors dumped stocks that had strong linkages either to the power sector or to realty. The much-anticipated listing of Anil Ambani Group company Reliance Power saw the stock losing 17 per cent relative to its offer price. This had a rub-off effect on power stocks, particularly the power generation companies, which had been sharply re-rated since October on hopes that the listing would set a new valuation benchmark for the sector.


After Monday’s closing, companies such as Gujarat Industries Power (-49 per cent), CESC (-30 per cent), GMR Infrastructure (-44 per cent), NTPC (-35 per cent) and Reliance Energy (-40 per cent) have witnessed a significant price erosion from the highs hit by them in the October-February period.

Reliance Power filed the draft prospectus for its mega IPO in October and mopped up Rs 11,000 crore in January. This contributed to a re-rating of power stocks and also to the run-up in domestic equities. Now with the Reliance Power stock listing below its offer price, power stocks have been beaten down to their October levels. Except for Tata Power and Torrent Power, all the stocks in the BSE Power Index have gone back to pre-October 2007 levels. 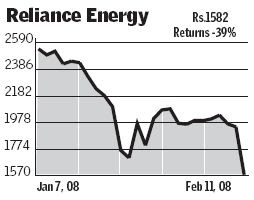 Notably, Sensex-constituent DLF, which held the crown for India’s biggest IPO till Reliance Power dethroned it, lost just 2.6 per cent even as the Sensex fell by 4.78 per cent.

From being one of the top five performers in 2007 (growth of 73 per cent for BSE Realty Index), 2008 has seen a poor start for the realty sector, with the index losing 30 per cent till Monday.

The same can be said for BSE Oil & Gas Index, which is composed of Sensex heavyweights like Reliance Industries, ONGC, losing 27 per cent in the year-to-date. The Oil & Gas index gave returns of 115 per cent in 2007 as Sensex clocked gains of 47 per cent.

Today, the fall in the Oil & Gas index was led not only by heavyweights but also by players such as Essar Oil (-16 per cent), Reliance Natural Resources (-16.4 per cent), and HPCL (-8 per cent), as investors were in ‘sell’ mode.