Stock Markets at the Crossroads

The strong rupee has had an impact on export receivables and the earnings of information technology companies
The phenomenal run up in the indices has not spread the cheer all round. On the contrary, retail investors, never a dominant force, are better off staying away and take the mutual fund route. 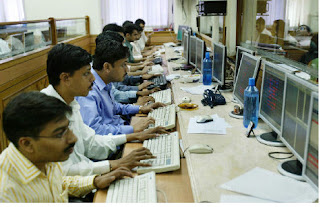 FRENZIED MARKET: Stock brokers trade in a nervous and volatile market at a brokerage firm in Mumbai. Share prices surged 3.5 per cent on October 3 amid a wider Asian rally and sustained overseas demand. The Mumbai stock exchange’s Sensex rose 608.95 points or 3.51 per cent to the day’s high of 17937.57.

It is not the meteoric rise of the Bombay Stock Exchange 30-share price sensitive index, Sensex, and the Nifty but the extreme volatility that has accompanied the rise that should merit attention.

On Friday, the last day of the week, the stock market behaviour was erratic to say the least. During most part of the day, the Sensex seemed poised to go past 18000. Indeed at one point it was just 20 points short, but during the last trading hour or so dipped sharply to close at 17773. 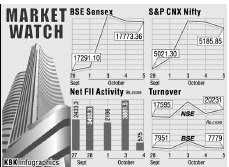 Still those are still dizzy levels and are especially noteworthy because of the speed at which the markets have climbed. In just five trading sessions, the Sensex shot up by 1000 points to reach 17000 and the Nifty — a more broad-based index and hence less susceptible to violent movements — to 5000 in 23 trading sessions. On September 18 the Sensex was at 15669. On October 3, it rose to 17847.

Conventional explanations are not wholly illuminating. It is true that the dominant foreign institutional investors have been especially active. Their net investment in September alone was $4.7 billion. On October 1, FII investment was $858 million. Surely these are large sums of money capable of moving the markets in one way. Domestic institutional investors, including mutual funds, have emerged as significant players. Indications are that they were sellers during the recent heady run of the Sensex and the Nifty. In August, they had picked up stocks when the markets were relatively lower. The ramifications of the U.S. sub-prime crisis were felt for the first time then.

Everyone agrees that the present rally is liquidity driven. The cut in the U.S. Fed fund rate has made credit cheaper. Global investors intent on securing a better return than what obtains in the developed markets, are flocking to the emerging markets. India figures high up in the latter category.

Yet there would be limits to how far global investors can keep on investing in India or specific emerging markets. Especially when the markets have, by many conventional yardsticks, become over valued. A correction or a profit booking at the very least might be round the corner. Within the emerging markets category, Indian stocks are relatively over-priced.

There are at least two other reasons why the FIIs may be less inclined to favour India with the same degree of enthusiasm seen recently. The first has to do with the U.S. economy and the second with the Indian economic fundamentals.

The twin crises — the housing and the credit markets — have by no means been contained and nobody has a clue as to when they will be. The Fed’ s lowering of the benchmark interest rates has no doubt fuelled the stock market rally everywhere including in India.

But the realisation that the U.S. economy might still slip into a recession (because of low consumer demand) will dampen investor sentiment. And contrary to what has been happening in India recently, an escalation of the U.S. problems would cause the dollar inflows to reverse themselves. The dollar is the currency of refuge and global investors would rather park their funds in American dollars than in any other currency. In fact, in the immediate aftermath of the U.S. sub-prime crisis global investors, who were repricing their risks, were not so optimistic on India and other emerging markets. They might have changed their stance for now but it is naive to think that they will persist with it for any length of time.

Strong economic fundamentals and robust corporate earnings have been the major attractions for overseas investors. By most accounts the economy is expected to maintain its growth momentum. The GDP for this year is forecast to be in the region of 8.5 to 9 per cent. After several quarters of impressive corporate results, the forthcoming second quarter results were expected to show a slowing down. However, the aggregate advance tax collections so far are about 40 per cent higher on a year-on-year basis. However, there have been signs, albeit feeble ones, that economic growth from now on might not be as strong as in the recent past. Recent official statistics indicate a slower industrial growth. The strong rupee has impacted on export receivables as well as on the earnings of IT companies. Global oil prices are ruling sky high. There is no way one can assume that the good times as seen by the 9 per cent plus growth and the sterling corporate results will continue to roll on.

The basic factors that have defined this strong stock market rally should not be ignored. Indian markets continue to depend on overseas investors although domestic players are becoming significant. This time there has been a bias in favour of specific sectors as well as stocks leading to a phenomenal rise in the prices of a few scrips only. A skewed pattern indicates uncertainty.